Awards and Facts » About Us

Academically, District students continue to excel on standardized tests, outpacing both state and county averages. Students have won high honors in county, state and national competitions, including Academic Decathlon and Science Olympiad tournaments, Mock Trial, and both visual and performing arts competitions. The District averages 30 National Merit and Commended Scholars each year. Graduating classes traditionally earn millions of dollars in academic and athletic scholarships. Graduates attend the most prestigious colleges and universities, and often receive appointments to the Air Force Academy, Annapolis and West Point. Olympic gold medal winners Janet Evans and Michele Granger are among these graduates, as are former State Senator John Lewis, world-renowned opera soprano Deborah Voigt, nationally recognized physician Dr. William Schoolcraft, baseball stars Dan Petry, Phil Nevin and Brett Boone, and NASA astronaut Joe Acaba.
Staff members have also been honored for their expertise and contributions to education. Numerous county, state and national awards have been presented to PYLUSD staff, including Orange County Teachers of the Year, California's Continuation High School Teacher of the Year, National Health Educator of the Year finalist, the nation's outstanding Director of Activities, California's New Drama Teacher of the Year, the nation's finalist for Technology Director of the Year and more. Recently, a teacher was recognized by First Lady Michelle Obama.
The community clearly values its schools. Working and non-working parents participate in school activities, and our PTA is one of the largest in the county. Every year, they volunteer nearly 200,000 hours.
The school district dates back to 1874, and has always maintained a rich, historical tradition. A portion of the 1912 Bradford schoolhouse still stands at one of our current high school sites, which opened in 1933. The remainder of the District's existing schools were built primarily in the 1960s and 1970s. Thanks to two community bond measures, four new schools opened between 2004 and 2009. The bonds also provided for the renovation of every school in the District, and resulted in modernized classrooms equipped with the latest teaching technology tools, new libraries, new school offices, new science labs, computer pods between classrooms, expanded parking lots, new gyms, new playgrounds, new gyms, new training and locker rooms, and much more.
The Placentia-Yorba Linda Unified School District obtained its name after the 1989 merger between the school districts serving the established community of Placentia and the growing area of Yorba Linda.
Today, the District's future looks very prosperous. The District has earned a reputation for excellence, and the community is proud of its schools. In 2002 and 2008, the community expressed their support of schools by approving school bond measures to renovate existing schools and build new ones. Despite fiscal cutbacks, our District has retained programs that are hallmarks of this community, including music education and expanded academies at all four comprehensive high schools. Families proudly state that they moved to this area because of its schools, making the Placentia-Yorba Linda Unified School District a desirable place to live and send children to school.
SCHOOLS: 34 Total
Strategic Plan: The PYLUSD Advantage 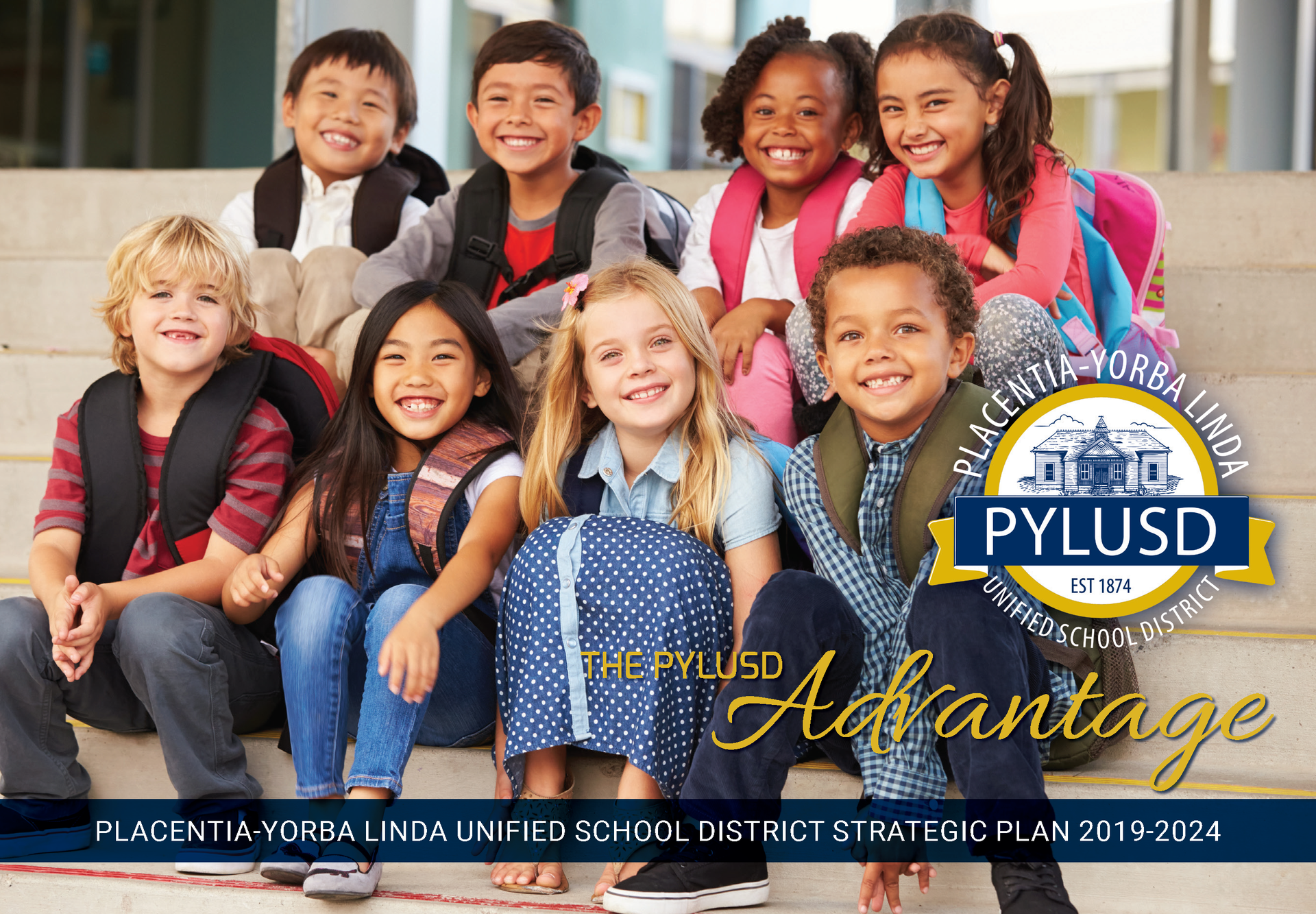 MISSION: The Reason We Exist
We inspire all students through rigorous and relevant educational experiences that empower them to become responsible, ethical, and contributing citizens.
VISION: The Direction That Drives Us
We are committed to being a dynamic and supportive learning community that prepares each and every student for success now and in the future.
CORE VALUES: What We Stand For and Represent
STUDENTS: 23,000